Starting February 1, 2016, the National Bibliometric Instrument (IBN) (developed by the Institute for Development of Information Society) is ranked by the WEBOMETRICS platform.

WEBOMETRICS "The Web Ranking of World repositories" is part of a series of rankings, which include universities, research institutes, business centers, hospitals and repositories around the world. This is an initiative of the Cybermetrics Lab, a research group belonging to the largest public research body in Spain: Consejo Superior de Investigaciones Científicas (CSIC), founded in 2006. The Cybermetrics Lab is focused on the quantitative analysis of content on the Internet and on the Web, especially related to the generation and communication of scientific knowledge. IBN has been listed for 5 years in the ranking "The Web Ranking of World repositories", in the "TRANSPARENT RANKING: Portals of Journals by Google Scholar" section. The classification methodology was as follows: Size (10%), Visibility (25%), Altmetrics (25%), Rich Files (10%), Google Scholar (30%). Since then, the ranking methodology has undergone several changes, and IBN has constantly climbed to places worthy of appreciation by the scientific community. In September 2020, the ranking reached its 10th edition, where IBN managed to position itself among the top 30 national repositories in the world. 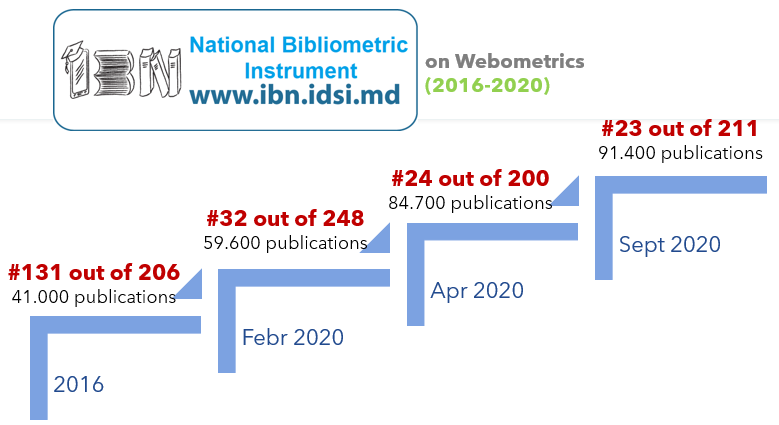 IBN is the largest open access electronic library to articles from scientific journals and conference proceedings in the Republic of Moldova, during 1993-2020. IBN includes information about the Moldovan journals registered in prestigious international databases, such as: SCOPUS, Web of Science, DOAJ, as well as foreign publications of the authors from the Republic of Moldova. Thanks to the collaboration between IDSI and Google, 93% of IBN content is indexed by Google Scholar.

The Transparent Ranking based on data collected from Google Scholar is published by WEBOMETRICS during the last 5 years, with editions in February and July. Its purpose is to improve the presence of the academic and research institutions on the Web and to promote the open access publication of scientific results. The collected webometric indicators are used to measure the overall visibility and impact of scientific repositories. Among the leaders of the 2020 ranking are the China National Knowledge Infrastructure, eLibrary.ru, Japan Science and Technology Information Electronic Aggregator J-STAGE, ResearchGate, Academia.edu and Cyberleninka.