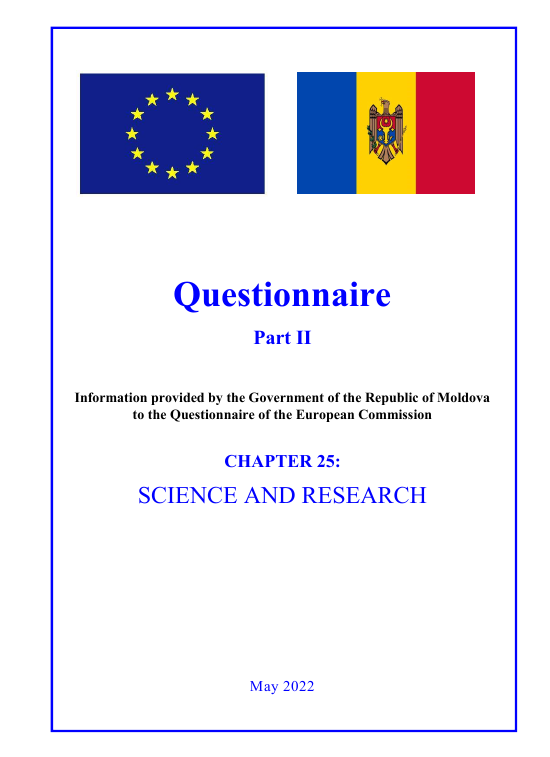 The structure and the answers of Moldovan Government from Chapter 25 “Science and Research” were presented in the post Science and research in the questionnaire with questions for the accession of the Republic of Moldova to the European Union (July 4, 2022).

Chapter 25 “Science and Research” also reflected the contribution of the Information Society Development Institute (IDSI) in presenting the radiography of the current situation in the research-development-innovation sector in our country.

In this context, it is worth to mention that during May 30, 2019 – October 31, 2019, IDSI, with the support of the Joint Research Center (JRC) of the European Commission, carried out a project Targeted support for entrepreneurial discovery process (EDP) in Moldova. With the participation of IDSI, as part of this project, the workshops were organized in 4 potentially identified niches for the given fields (Energy, Information and Communication Technology, Agriculture and Food Processing, Biomedicine and Biopharmaceuticals), which will contribute to the efficiency of the research process geared to the needs of the national or regional economy. As a result of these workshops, 4 comprehensive reports were developed.

Certainly, this IDSI contribution allowed the following finding in the questionnaire: "should be noted that these areas have had a significant presence in the economic, innovative and scientific potential of the Republic of Moldova, identified by the initial and subsequent mapping, and have been confirmed by the updated mapping in 2021" (p. 21).

IDSI had input on this segment, which aimed at organizing the process of mapping the data ecosystem in the Republic of Moldova, within the DataRevolutionMD project carried out in February 15 – June 15, 2016. IDSI's involvement consisted in a comprehensive assessment of existing data availability at the national level from the perspective of infrastructure, regulatory framework, stakeholders, capacities and to develop recommendations on key actions needed to monitor the implementation of the Sustainable Development Goals (SDGs) in the Republic of Moldova in an inclusive and participatory way.

a) Implementing the principles of Open Science by ensuring free access to scientific publications and the implementation of digital technologies in all spheres of the research and innovation system;
b) Development of the National Bibliometric Instrument (IBN), which indexes publications in journals, materials of scientific events and international publications of Moldovan authors indexed in prestigious international databases;
c) Carrying out the projects within the call "Offering solutions on promoting the concept of Open Science and the development of digital technologies in the fields of research and innovation";
d) Elaboration of the concept for development of Open Science in the Republic of Moldova (p. 36).

The realization of these activities was possible due to IDSI projects, which allowed the promotion and implementation of the principles of Open Access and Open Science in the Republic of Moldova.

The project for young researchers (2010-2011) Development of the National Bibliometric Instrument, supported by IDSI employees, which managed to become the largest electronic library with Open Access to Moldovan authors articles published in scientific journals, in the proceedings of scientific events (on 06.07.2022 offers access to 156583 scientific publications with Open Access).

In the call "Offering solutions on promoting the concept of Open Science and the development of digital technologies in the fields of research and innovation" (2021-2022) IDSI won two projects aimed on developing open source software and online tools for disseminating scientific results from strategic research and innovation priorities, and strengthening the policy framework for Open Science in Moldova.

The Activity Plan of the Ministry of Education and Research for 2022 provides for the elaboration of the concept of the strategic document on Open Science in the Republic of Moldova, the responsibility has been delegated to the Information Society Development Institute.

Several answers to the questionnaire mention the need for access to research infrastructure, as well as the fact that the Republic of Moldova has initiated the process of elaboration of the National Roadmap for the Development of Research Infrastructure as an integral part of the National Programme in the fields of research and innovation for the years 2024-2027.

Thus, the projects carried out by IDSI, as well as other actions undertaken during the last decade managed to become a support for the integration of the Republic of Moldova in the EU, being reflected in the Questionnaire sent to the European Commission for accession to the European Union.